“Happy is the land where economists or market analysts don’t masquerade as motivational speakers.” – unknown

Primary agriculture remains an investment class asset. In recent online discussions with Agri SA and the Transvaal Agriculture Union, concerns were raised by various sectors but it is clear that the primary industries are resilient. The words of Winston Churchill during World War II seem apt, “Never was so much owed by so many to so few.” Food production in the country merely continues, despite difficult and uncertain conditions. The importance and contribution of a productive agricultural sector is clearly visible. Of course, this goes beyond the farmer and his farmworkers and includes role players in the up- and downstream agricultural value chain.

The power of a productive agricultural sector

The role of organised industry or agriculture also emerges strongly. Producer organisations identify issues or problems via the Agri SA commodity chamber on a weekly basis, and these concerns and possible solution are then raised with various ministerial working groups. The MPO has placed the following matters on the agenda or radar of the minister of agriculture: 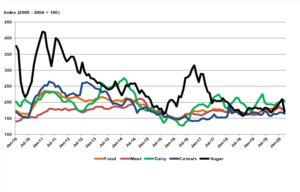 Over the past few months, international prices in United States (US) dollar terms have dropped. Over the same period, the rand weakened against the US dollar and, as a result, it is costly to import. 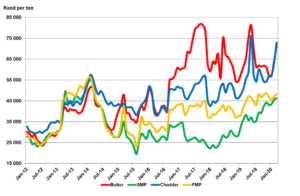 The South African economy was growing by 0,2% in 2019. The country suffered three quarters of negative gross domestic product (GDP) growth and entered the pandemic out of the recession, growing at less than 1% coming out of 2018. According to the International Monetary Fund, a 6–10% contraction is projected for 2020.

South Africa’s GDP in 2019 was R5,1 trillion in nominal terms. Gross domestic product is expected to contract by a nominal 10% (or R500 billion) in 2020. It is important to understand the magnitude of what the country will be facing in the next months, i.e. that consumers need money to buy product. A nominal 10% is about 6% in real terms and the scenario sketched by International Monetary Fund is quite possible.

Sub-Saharan economies are expected to shrink by approximately 2% in 2020. More than 80% of South Africa’s dairy exports are destined for the sub-continent. The South African agricultural sector is market driven, meaning that it produces according to the demand for a product. The macro analysis indicates that demand for products will decrease – including dairy. The MPO has already started testing the market to determine what can be done to allow market signals to flow more frequently between role players in the value chain.

Unprocessed milk production started to slow down towards the end of 2018 and virtually stagnated in 2019, with the trend continuing into the first quarter of 2020. This was simply the result of too low producer prices during 2018 and 2019. The current level of unprocessed milk production is being absorbed by the market and marketplace feedback indicates that milk is in demand from processors. However, it is now winter, traditionally a lower production period. Against the backdrop of the unknown demand as the economy shrinks, the MPO believes that producers should be cautious and not chase volumes. Producer prices have begun to recover for the first time in more than two years and high volumes under these circumstances will hinder this trend. 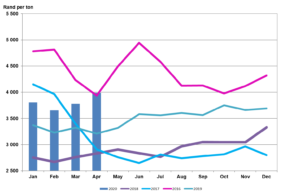 Feed is currently high-priced, mainly because the biofuel industry in the US has been affected by the low oil price. The Chicago Board of Trade prices are also substantially lower. Feed prices in South Africa remain high because of the rand–dollar exchange rate. The milk to feed price ratio is 1,29:1. At a price ratio of 1,4:1 favourable economics start to return to the dairy farm. 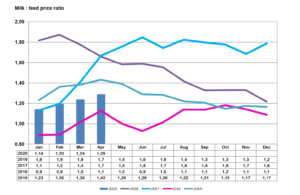 However, there is always the unknown in agriculture, such as the weather, thus take care. Since imports are not lucrative currently, processors appear to be replacing imports with locally produced products, a new phenomenon referred to as economic patriotism.

MPO focus during lockdown and amid a contracting economy

MPO Pointer 8/1 JULY 2020 For the past five years, erratic producer prices for milk farmers all but wiped out dairy farm resilience and increased
Read More

The Pretoria High Court has ruled against the sale or trading of water rights. In three separate matters argued in October 2019 before the court on
Read More